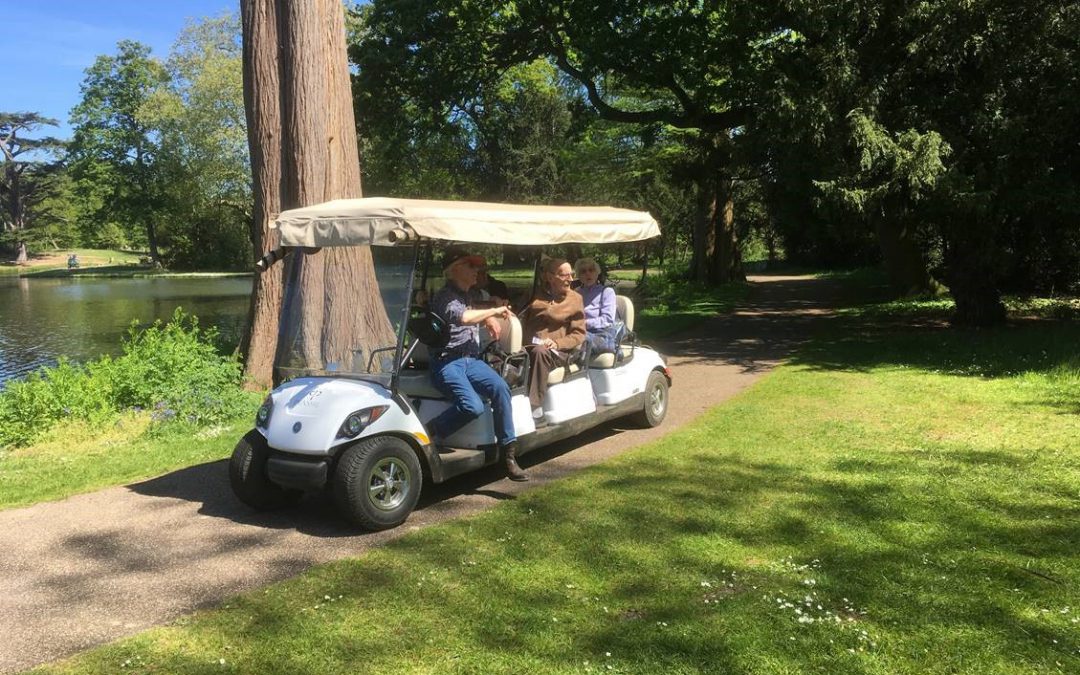 The Grand Tour
After lunch, on a lovely sunny May afternoon, two cars driven by volunteers set off with four Old House Residents from Ewell to Painshill Park at Cobham about 6 miles away. We went to England’s most elegant 18th century landscaped garden. It was created by Charles Hamilton (1704-1774) who was born in Dublin to the 6th Earl of Abercorn. He was the 14th child and youngest of nine sons.

Hamilton was educated at Westminster and Oxford after which, like many aristocrats of that period, he went on two Grand Tours across Europe. In 1737 he acquired the undulating land which is now Painshill with views over the River Mole. He transformed it into his own pleasure garden inspired by scenes and vistas he experienced on his Grand Tours.

On arrival, we were joined by another Old House volunteer and a 4 and a 6-seater “golf cart” plus two Painshill driver guides. We set off uphill through a bluebell wood to reach a viewpoint over a vineyard set on a south-facing slope at the foot of which was a lake and a view over miles of green Surrey countryside. We then continued to a re-creation of a Gothic folly at another viewpoint, then down to the shore of the lake teeming with wildfowl. Along the shore, we saw several re-created bridges, other follies and an island grotto. Leaving the lake, we climbed to new viewpoints from the Turkish Tent and the Bacchus Temple; the golf carts allowing us to access paths not usually open to the public. Our return journey took us along the other side of the lake, past an enormous 200-year-old Cedar and an 18th century Ice House.

Our Grand Tour included a stop at the café for a cream tea then back aboard the golf carts to the carpark and cars home. A superb visual and gastronomic afternoon out.

We uses cookies to improve your experience on our site. Cookies enable you to enjoy certain features, social sharing functionality (for LinkedIn, Facebook, etc.) and to tailor messages to your interests (on our site, and others). They also help us to understand how our site is being used so that we can improve it. Find out more by reviewing our privacy policy. By continuing to use our site you consent to use our cookies.OkPrivacy policy